☆ Skylaire was recently appointed to the post of LA UFO Examiner at the highly regarded Examiner news website.
Currently featuring a heretofore undisclosed UFO sighting at an Air Force facility and a three part interview with Mike Bara.

☆ On March 1st, LOWFI Will Seek Nixon's Ghost! Want to come along with us?


☆ The LOWFI site and 8 blogs to go with it are rockin' and rollin' at www.forteanswest.com!

Review in a Hurry: This spacious meld of old, old-school Hollywood and traditional Indian saga slathered with just a pinch of Bollywood ought to have enough spice and romance for the suburbs.

Review in a Hurry: Bedazzled in blood and soap opera complications, this gothic rock opera features as many sets of on-screen intestines as it does plot points. There are many unpleasant futures to contemplate, but do any of them really need to involve Paris Hilton?

☆ The League of Western Fortean Intermediatists' most exciting event so far, held on October 19th was very well attended and featured a superb talk by our pal Adam Gorightly. Many, many thanks to everyone who shared in the fun. 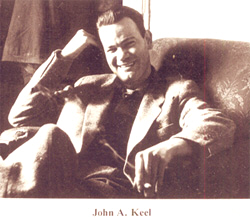 ☆ The LOWFI event at the "In Search of Tiki" exhibition went rather well! Thanks to all!

Ezekiel's Wheel, Zoroaster, heck, Muhammad, the Dogon tribe ... I'm curious. Do you feel a certain camaraderie with Nostradamus because he was basically exiled, somewhat like heavy metal, and ultimately triumphed when he gained the patronage of Catherine de Medici and wrote the quatrains?
Yeah! Thank you for picking up on that! You're one of the few journalists that has. But that was one of the appealing parts of the man's character. You know, in metal, we talk about rejection, and running up against people that attack us. That's exactly what that guy went through. He was looked upon as a bit of a freak, and he had this gift, this uncanny ability to have these visions and prophecies, and he was looked upon as being someone — at least by the Catholic Church — dabbling in the black arts.

☆ Here are links... to Art attack: Dog and Pony Show benefit at Metromix Los Angeles... and to Skylaire's film reviews for E! Online of Tropic Thunder, The Sisterhood of the Traveling Pants 2, the documentary American Teen.

☆ The League of Western Fortean Intermediatists (L.O.W.F.I.) invites you, on Weds., August 13, 8pm: to a free screening of "The Silent Revolution of Truth"

☆ "Hello all, I hope this finds you all well and weird. I've just returned from the fabulous MUFON Symposium in San Jose. You can read my piece in the Silicon Valley Metro.

☆ New on the site: Gonzo: The Life and Work of Dr. Hunter S. Thompson.

Hi gang, Thanks to everyone who came out today to see the Holyland and ride to Damascus. The LOWFI videographer recorded this previously unrecordable tour and we will be editing together a short video to post on our website, and most likely a few sites like Youtube. Thanks again for your participation, and look for future emails about upcoming events, lectures and meetings! Yours in Fort, Skylaire

☆ The inaugural LOWFI meeting took place on Sunday, July 6th, 2008! This was the announcement. A dozen Fortean explorers discussed lots of good ideas for the path that will shape the League's development.

☆ Skylaire has joined the community of professionals at LinkedIn. View Skylaire's public profile.

☆ The Mission Statement of the newly founded League Of Western Fortean Intermediatists has been published! We're excited, as the Western United States has long needed an outlet for Fortean curiosity and research. Keep your eyes peeled for new developments...

☆ Prompted by the release on May 28th of Hollywood, UFOs and the Occult: The Impending Something, wherein out-there researchers discuss the impending ... something, Skylaire is once again on assignmment for LAWeekly. This is a good thing.

☆ Skylaire was featured recently on the Women Of Esoterica blog. Thanks, Lesley!