To think is to conceive incompletely, because all thought relates only to the local. We metaphysicians, of course, like to have the notion that we think of the unthinkable.
- Charles Fort, from The Book of the Damned (1919) 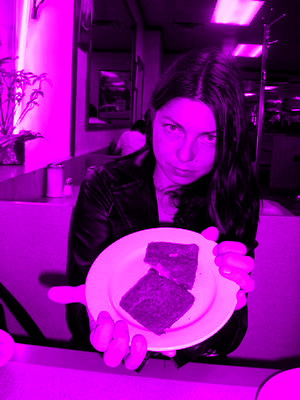 It’s said that the first child born to the great-great grandparents of Elizabeth Bowes-Lyon (mother of Queen Elizabeth II) popped out greatly deformed, “His chest an enormous barrel, hairy as a doormat, his head ran straight into his shoulders and his arms and legs were toylike.” Imprisoned for life in a secret chamber in the family castle, the so-called “Monster of Glamis” metaphorically represents many of my interests: when something doesn’t fit, it is often hidden.

I’m not sure where it started, the itch to investigate all things unexplained, the supposition by age five that I had been placed on this big heaving mudball to observe humanity, rather than be a part of it. When I discovered the ground-breaking works of grand-daddy phenomenalist Charles Fort, I found the brilliant misfit voice of someone else who seemed to feel like more an observer of -- than participant in -- the race around him. I empathized with the odd and the singular, and Fort became my patron saint.

Surely, my upbringing had something to do with it.

My mother, who is truly not of this planet, had been a virgin until her college room mate decided she needed to go on a date, the kind that starts with wine and a hi-fi and ends in... rape and abortion. My mother claims she was hoping the procedure would kill her; instead, her unborn ‘son,’ whom she named Seth, hovered about until I was 16, when she was ‘forgiven’ for her choice (I think I was concieved to pay off her imagined debt to Yeshua.)

My father -- he’s out there, somewhere -- was “extremely intelligent, very attractive, and highly medicated,” according to my uncle’s description. I grew up isolated, prefering books to children. At age 13, I witnessed my first UFO alongside military personnel at Edwards Air Force Base (where it's said President Eisenhower met with alien ambassadors of a Nordic countenance in the ‘50s), and discovered the International Fortean Organization out of Baltimore, the successor to a society founded in Fort’s honor before his death in 1932.

At age 13, in the sole care of my mother, I made a pact with her that if I went and got “saved” by Billy Graham, I would never have to go to church again; but it was only in my 20s that I realized it was my mother -- whose ceaseless selflessness and ability to see angels and speak in tongues, whose prophetic visions prompted personal letters from Mother Teresa -- who had unwittingly fostered my interest in UFOs, the paranormal, everything you catch glimpses of, but can’t entirely see. Without realizing it, I longed for a personal connection to the divine: just not hers.

I dreamt of the Smithsonian’s basement, long said to be a repository for artifacts which would knock the established sciences out of their orbits. Academics appeared so... entrenched in whatever their peer-reviewed publications told them to be entrenched in. Later in life, I learned this was a belief held by more than just the “fringe” element.

I invented a lifeform that would thrive in the atmosphere of Jupiter for my 5th grade science project. I wanted to be a parapsychologist, but only two schools offered such a degree. Instead, I followed in what I’d like to think are Jack London’s footsteps: I’ve roped cattle on the border of Area 51, worked on cars, and been trapped in a jungle halfway around the world on Christmas, without money or a change of underwear. All, in the words of Charles Fort, “to put capital in the bank of experience.”

My conception of God, for lack of a better term, has become a loose amalgamation of Loki (the Norse God of chaos), Philip Marlowe and Bill Hicks. “Dogmatists of any stripe,” I once wrote, “are fundementally wounded, whether they’re Islamic terrorists, Christian abortion clinic bombers or magicians with an ax to grind.” Fort’s writing showed me how subjective not only belief -- but truth, as well -- can be, and it was his writings -- alongside those of John Keel and a handful of other illuminates -- that made me feel like I was part of something, something greater. Fort’s philosophy has greatly informed my world-view. I am, in my way, a seeker of Truth. Such individuals, Fort wrote beatifically, “will never find it. But the dimmest possibilities -- he may himself become Truth.”

In this search -- I am no longer an echo of Seth, or feel like a monster hidden from view -- but something I once was not. I became part of something else. And I am not alone.